Trump’s budget plans also feature drastic cuts to international and environmental spending. He’s reportedly pushing for a 24 percent cut to the EPA budget and a 37 percent cut to the State Department and USAID budget. While such reductions would have profound effects on these agencies, they are a drop in the bucket compared with the Pentagon budget. In 2016, the Department of State and USAID received an estimated $50.6 billion, or 1.3 percent of all federal spending. The EPA received $8.3 billion, or 0.2 percent of all federal spending. Meanwhile, the Pentagon got 15 percent. 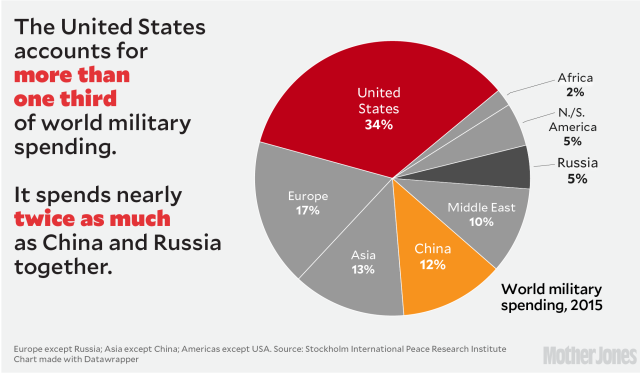 Meanwhile, the Pentagon’s books are such a mess that it has never been audited, and the Government Accountability Office has repeatedly (though politely) criticized it for its “long-standing financial management deficiencies.” Even as Trump talks about shaking things up in Washington, DC, his budget plans reveal that he won’t challenge a costly budgetary tradition: giving the Pentagon a pass.