In fact, we might go even further. Restrictions on free movement may actually reduce wages and workers’ standards.

Because we know from history that immigration doesn’t stop when it becomes harder. Just look at Mexico and the United States. If more EU nationals enter the UK undocumented, they will be working outside official channels, labour laws and the official minimum wage.
END_OF_DOCUMENT_TOKEN_TO_BE_REPLACED

There are six key takeaways.

First, living standards matter. Reflecting on the results three weeks ago, we noted that recent changes in living standards hadn’t played much of a role – despite the contention that people were angry about the post-financial crisis squeeze on living standards – but that deeper rooted economic differences did. That finding is confirmed in our more detailed investigation, with employment levels proving the indicator with the strongest link to tendency for an area to vote Leave. A 10 percentage point (ppt) rise in the employment rate within a local authority is associated with a 1.7ppt fall in the leave vote. Areas where high numbers of people are out of work voted to leave.
END_OF_DOCUMENT_TOKEN_TO_BE_REPLACED 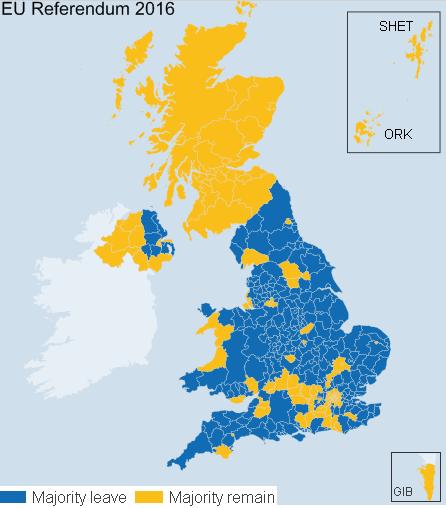 END_OF_DOCUMENT_TOKEN_TO_BE_REPLACED

Strategically the instinct Corbyn has followed is right: Labour’s new heartland is millions of progressive, liberal minded, globalist people, especially among the young and in the salariat. Forging an alliance between them and the old, manual working class is the challenge — because these are different political “tribes” with sometimes divergent values. But it’s doable, because radicalism on the economy can unite them.

However in the next 10 days we have to change the minds of a much wider group of people, not necessarily Labour voters, who are sick of seeing their own communities blighted and neglected by successive Labour and Tory governments (and councils) alike.

Wrongly they see migration as the main reason. And subtextually they are seeing Brexit as a way of “getting one over” not just on the elite but the liberal middle classes in general. This group does not only include white workers: it includes some black and Asian voters too.

END_OF_DOCUMENT_TOKEN_TO_BE_REPLACED

Most of us do not see the brutal parallel universe at the heart of the mainstream economy. But in the Fens, it has been highly visible – along with the transnational organised crime running a part of it. This has made people very angry. Now they want out of Europe – more than two–thirds of voters in Wisbech’s parliamentary constituency said in a 2014 survey that they would favour the UK leaving the EU.

The scene that plays out at the BP garage each day is not simply about migration or the human cost of cheap goods or isolated rogue operators. It is the manifestation of a profound social and economic change that has been enacted in little more than two decades.

From the late 1980s on, new technology allowed employers to eliminate much of the financial risk from their end of the chain. Supermarkets, for example, only reorder stock when a customer buys an item and its barcode is scanned, generating an instruction to their suppliers to replace it by the next day. Orders can double or halve within 24 hours, so workers to process and pack the goods are called in at short notice. This reduces costs and increases profits, since businesses no longer have to keep inventory or pay for full employment. Instead they have outsourced labour provision to agents or gangmasters. Agriculture and food processing pioneered this lean approach to business, but its zero-hours practices have spread to other sectors – to care homes, catering and food service, hotel work, cleaning, construction, and personal services such as nail bars and car washes. …

Blaming immigration rather than the forces that drive it, local people have turned to politicians who promise to curb it. In 2013, Ukip won all four Wisbech seats in the county council elections. There have been tense anti-immigration protests in the town. Both communities felt under attack – eastern Europeans remember how a gang of local teenagers beat up two members of their community in 2006. English residents I met were quick to say that they no longer felt safe or at home in their own town. …

Liberalising trade rules and financial flows has enabled the free movement of goods and capital across Europe – and, with them, people. But while World Trade Organisation rules prescribe global hygiene standards in minute detail, they are largely silent on the social and labour conditions in which the goods are produced.

A complex web of small rules widely obeyed – from paying your tax to insuring your car, to giving workers proper breaks – are the threads that weave a democratic social contract and a protective state. Many people in Wisbech have become more rightwing, in protest at what they see. The collapse of totalitarian structures of state control in former-Soviet eastern Europe has combined with a shrinking of state in the west. This shrinking of the state has created the vacuum into which organised crime has rushed.

The gangsters on England’s doorstep
http://www.theguardian.com/uk-news/2016/may/11/gangsters-on-our-doorstep