Britain is now the second biggest arms dealer in the world

Thirteen civilian casualties a day in Yemen conflict. The UN has put the death toll (since March 2015 and up to August 2016) at more than 10,000, with 3,799 of them being civilians. At least 7.6 million people, including three million women and children, are currently suffering from malnutrition and at least three million people have been forced to flee their homes.

Just under half of Yemen’s population is under 18 and at least 1,339 children are among the dead, according to the UN children’s fund (Unicef).

19 million people were in need of some form of humanitarian or protection assistance. Almost 14.4 million people in Yemen are food insecure. This includes more than seven million people in desperate need of food assistance; that is one in five of the country’s population. Yemen has one of the highest rates of child malnutrition in the world and now an estimated 1 in 5 people are “severely food insecure” and in urgent need of food assistance. About 3.3 million children and pregnant or breast-feeding women are acutely malnourished, including 462,000 children under five who face severe acute malnutrition. That represents a 63% increase since late 2015 and threatens the lives and life-long prospects of those affected, according to the UN.

The conflict has also forced some 560,000 out of school, raising the total number of school-age children out of school in Yemen to 2.2 million. During the 2015/2016 school year, UNICEF reported 1,600 school closures across the country.

The Saudi-led coalition bombing of Yemen has been condemned by the UN for carrying out “widespread and systematic” attacks on civilian targets in violation of international law.

Britain, along with France, remains one of the biggest suppliers of arms to Saudi Arabia. UK has licensed over £3.3bn worth of arms to Saudi Arabia since the bombing began in March 2015, including £2.2bn on aircraft, helicopters and drones, £1.1bn on grenades, bombs, missiles and countermeasures, and £430,000 in armoured vehicles and tanks. Fifty-eight Eurofighter jets and 2,400 500lb Pathway-IV guided missiles have been sold by Britain to Saudi Arabia in 2015. The Saudi government has admitted it has used UK-manufactured cluster bombs against Houthi rebels, while Britain’s foreign office admits that UK typhoons have been used in Yemen.

Yemen usually imports more than 90% of staple food. But a naval embargo imposed by the Saudi-led coalition have severely reduced imports since 2015. A lack of fuel, coupled with insecurity and damage to markets and roads, have also prevented supplies from being distributed. The poverty rate has doubled to 62%, with public sector salaries – on which about 30% of the population depend – paid only irregularly.

An estimated 14.8 million people lack access to basic healthcare, with 8.8 million living in severely affected areas. Only 45% of the 3,507 health facilities surveyed by the World Health Organization in November were fully functioning, and even they faced severe medicine, equipment and staff shortages. As of October 2016, at least 274 health facilities had been damaged or destroyed in the conflict.

More than 75 percent of Syrian refugees are women and children.

Since 2011, 50 Syrian families have been displaced every hour of every day. The pace of displacement remains relentless.

Three out of four Syrians live in poverty.

Nearly 7000 airstrikes since a US-led campagin began in September 2014.

The Russian air force in Syria has conducted 19,160 sorties, delivering over 71,000 strikes since the start of an anti-terrorist operation on Sept. 30, 2015, said Valery Gerasimov, chief of the Russian Armed Forces General Staff.

In one year alone (2015), USA sold $33 Billion in Weapons to Gulf Cooperation Council states—that’s Bahrain, Kuwait, Oman, Qatar, Saudi Arabia, and the United Arab Emirates. Where munitions are concerned, the twin bombing campaigns against the Islamic State in Iraq and Syria and against Houthi rebels in Yemen are driving sales of precision weapons and “dumb” bombs alike. In 2015, the U.S. delivered 4,500 precision guided munitions to GCC states, including 1,500 taken from the U.S. military’s own inventories.

Bombs makers like Lockheed Martin, Raytheon, Boeing, and General Dynamics all stand to benefit from the uptick in overseas sales. Lockheed alone has already received $18 million to bump its Hellfire missile production from 500 to 650 missiles per month. Lockheed has also quadrupled production of Paveway II laser-guided bombs, a favorite of the Saudi Royal Air Force. All that’s on top of the $1.8 billion the Pentagon is asking for in its fiscal 2017 budget request to fund the production of 45,000 smart bombs to replenish its own stores.

The Kremlin said it spent almost $500m on its military operation in Syria from 09/15 to 03/16. But Moscow could earn a lot more after the world saw Russia-made weapons, old and new, battle-tested by the Russian air force and Syrian President Bashar al-Assad’s military on the ground.The Kommersant daily said in 2016, quoting Kremlin insiders and military analysts, that the “marketing effect” of the Syrian conflict will boost Russia’s arms sales by up to $7bn. In 2015, Russian arms exports hit a record $14.5bn because of their “reliability and high effectiveness”, President Putin said in late March. The figure was higher than expected, and foreign orders for Russian weapons exceeded $56bn, Putin added, addressing a meeting of defence officials.

The top spenders are responsible for 75% of global military spending $1.7trillion (2011). The USA accounts for 41%.  NATO countries (the US, Europe and the UK) accounted for 70 per cent of the global military expenditure. Europe has 7% of the world’s population and 20 per cent of global military expenditure (TNI). The Permanent Five nations on the Security Council (USA, Russia, China, UK and France) and Germany account for approximately 80% arms sales – all this while their role on the Security Council is to keep the peace.

2. More on Defence than Education

On average,  industrialized countries spend 3 times as much on defence as on education; in particular, the ratio is 6:1 rather than 3:1 in USA. Many of the world’s poorest countries and fastest growing economies (both measured in terms of GDP per capita) spend much more on defence than either on education or on health.    (Unicef)

5% of this $1.7trillion  (2011) would be needed each year to achieve the Millennium Development Goals by 2015 according to the World Bank and the Office of Disarmament Affairs (ODA).  (IPB 2012)

80% of the world’s 20 poorest countries have suffered a major war in the past 15 years, and the human legacy continues long after. Nine of the 10 countries with the world’s highest child mortality rates have suffered from conflict in recent years.  (War on Want: Banking on Bloodshed 2009)

One aircraft carrier ($5 billion) = reforesting an area three times the size of Costa Rica in the Amazon ($300 per hectare).

The General Accounting Office (GAO) reported that US forces had expended around six billion bullets between 2002 and 2005, that is at least 250,000 bullets for every insurgent killed in the ‘war on terror’

Just in a three-week period of conflict alone in Iraq during 2003 it was estimated that nearly 2000 tons of depleted uranium (DU) munitions were used.  Paul Brown, The Guardian, April 2013

A recent estimation by Professor Linda Bilmes, who co-authored the book ‘The Three Trillion Dollar War’ with Nobel-laureate economist Joseph Stiglitz, calculated that the total cost of the wars in Iraq and Afghanistan are now likely to reach astronomical $6 trillion for the US government alone

7. The Military, War and Climate Change

Official accounts put US military usage at 320,000 barrels of oil a day. The US military is a major contributor of carbon dioxide. The Iraq war was responsible for at least 141 million metric tons of carbon dioxide equivalent (MMTCO2e) from March 2003 through December 2007.  That war emits more than 60 percent that of all countries.   (Steve Kretzmann, Oil Change International)

The F-4 Phantom Fighter burns more than 1,600 gallons of jet fuel per hour (just three hours of flight uses as much fuel as the average driver does in one year of driving) and peaks at 14,400 gallons per hour at supersonic speeds.

If the USA  Department of Defense were a country, it would rank 58th in the world, using slightly less than Denmark and slightly more than Syria (CIA World Factbook, 2006)

The projected full costs of the Iraq war (estimated $3 trillion) would cover “all of the global investments in renewable power generation” needed between now and 2030 to reverse global warming trends. (  Oil Change International 2011)

Between 2008-2010, the combined defence and aerospace sector in the USA made profits of $71.6 billion in total and paid an effective tax rate of only 17%.  Boeing made a large profit of $9.7 billion in this period, yet it received a tax rebate of $178m. (Citizens for Tax Justice)

Boeing has 38 subsidiaries in foreign tax haven jurisdiction, as of February 2011. (USA based Institute for Policy Studies)

In 2002, the combined profits of the five largest U.S.-based defense contractors were $2.4 billion (adjusted for inflation); by 2011, that figure had increased by 450 percent to $13.4 billion

US arms giant Lockheed Martin tops the list, selling $35.7bn worth of arms in 2010; the second biggest is the British company BAE Systems – it sold $32.9bn of arms, which is around 95 percent of the company’s total revenue that year; Boeing is third with $31.4bn, which is around half of its total sales for the company most famous for its commercial airliners. Northrop Grumman, the world’s largest builder of naval vessels, is fourth with $28.2bn; General Dynamics is fifth with $23.9bn.

Furthermore, 60% of global arms sales are from rich countries, eg G8 nations, to developing countries, with USA and Russia alone responsible for two-thirds  (The Economist 2012)

In 1998, the Brookings Institute carried out an ‘atomic audit’ of the US nuclear weapons programme from 1940 to 1996. The estimated total costs are $5.5 trillion.

Similar studies about the nuclear spending of the rest of the world are unfortunately lacking, but the International Peace Bureau estimates the global annual total is around $90 billion.

The nine nuclear weapons countries collectively spend $100 billion dollars annually on their nuclear programs. This conservatively estimated expenditure represents about 9% of their total annual military spending.  At this rate the nuclear-armed states will spend at least $1 trillion on nuclear weapons and their direct support systems over the next decade. It will likely go significantly higher as numerous modernization programs underway are ramped up. It would go higher still if the true intentions of many non-nuclear weapons countries could be divined and their secret weapons programs added to the total. (Global Zero$1 Trillion Per Decade 2011)

12. Countries whose military spending is more than $1 billion in 2010

If the top military spenders in the world had adopted the 5% threshold rule since 2002, their total military expenditure would have been reduced to $730 billion by 2010, rather than actually increased to £1.3 trillions 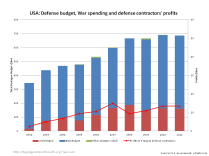 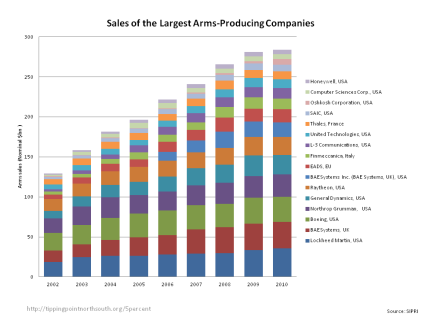 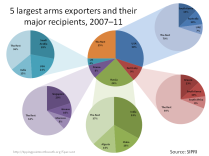 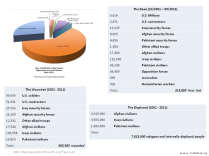 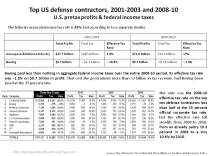 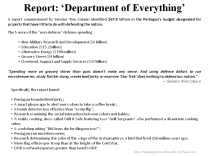 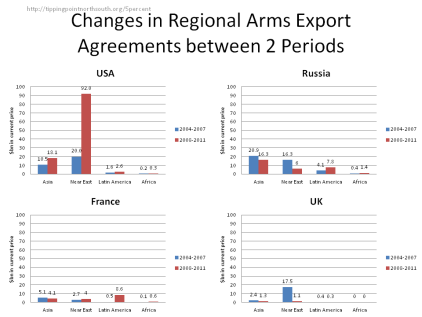