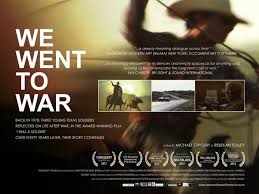 In 1970, a young British director Michael Grigsby made one of the first films about veterans returning home from the Vietnam war – the critically acclaimed and award winning, I Was a Soldier. The film focused on Dennis, David and Lamar (three young soldiers recently returned from combat), as they tried to re-adjust to life back home in the heartlands of Texas, after a year on the frontline. WE WENT TO WAR sees filmmakers Michael Grigsby & Rebekah Tolley return to the stories of those once young Americans, now aged and scarred by lives lived far too brutally, far too young and finds a shared sense of understanding with so many of those returning from the frontline today, poignantly echoed in the experiences of soldiers in the aftermath of Iraq and  the war in Afghanistan.

We Went To War Trailer

‘Grigsby treats reality with the imagination of an artist.” (The Times)

“One of Britain’s finest documentarists” (Time Out)

Post-Film Discussion with Michael and Rebekah

We’re delighted that both Michael and Rebekah can join us for a post film discussion and Q&A.

With a filmography spanning over five decades and 30 films, Michael Grigsby occupies a unique position in British documentary filmmaking, having witnessed and commented on many of the dramatic changes in British society (and beyond) from the late 1950s through to the 21st Century. As a critic recently noted, “…from Grigsby back to Grierson runs an unbroken tradition in British documentary-making; a passionate commitment to the poetry of everyday life.”

Rebekah Tolley is a creative producer, award winning digital artist and photographer. In recent years she worked as Executive Producer/Director on high profile projects for the BBC and the United Nations, amongst others. Additional projects have included BAFTA Los Angeles Heritage Archive project, where she worked alongside veteran Hollywood producer Paul Heller (Enter the Dragon, Dirty Harry, Withnail & I, My Left Foot). In 2005 she worked with Michael Grigsby on his film Rehearsals, the third of a trilogy of films he made, set against the troubles in Northern Ireland. She now works with Grigsby as producer and co-author.

The Lexi Cinema is located at 194 Chamberlayne Road, Kensal Rise, NW10 3JU. It is around 7 minutes walk from Kensal Rise over-ground station and a good bus service runs from central London. The 52 (from Victoria) and the 6 (from Oxford Circus) stop directly outside the cinema. To map your route by public transport click here, and for a streetmap click here.