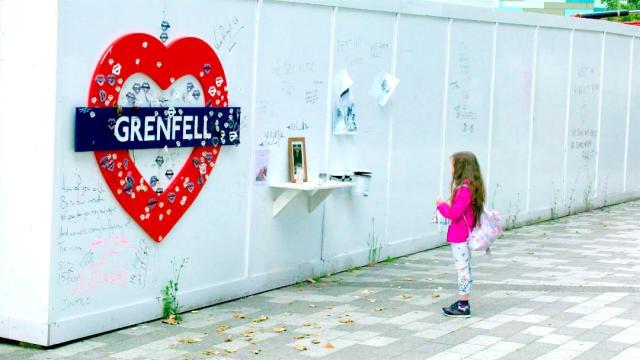 June 14th marks the 2nd anniversary of the Grenfell Tower fire. Below is our funding appeal for GRENFELL TOWER: Lessons From The Ashes.

We want to raise £10,000 towards the current production phase – the making of ‘stand alone’ short films that will also, later, be material for the long form cinema documentary that is made at the same time.

The film-makers are rooted in the North Kensington and Grenfell community; the community are central to the project’s direction; everyone is intent on the film being a part of a justice campaign; the film-makers are established, delivering a project of the highest standard.

Our society cannot pay enough attention to the underlying causes of events that led to that terrible night. As individuals, as Londoners, as wider civil society, we owe it to those who lost their lives, and to those still living with the pain of it, to make sure we know the full story and that those responsible are brought to justice.

Grenfell Tower: Lessons From The Asheswill reveal the social and political history that ended in the tragedy that rocked Britain and ask many of the questions the public inquiry may not. This is the story of ordinary people living in the wealthiest borough of one of the world’s richest countries, being let down by the oldest democracy on earth.

Please donate to support this project if you can and join us in standing with all those in the Grenfell and North Kensington community who are at the forefront of the struggle to put right an utterly broken system.

Every donation, no matter how much or how little, helps us reach the £10k goal. And please do feel free to share this email appeal with family, friends and colleagues.

*Scroll down for detailed information and film links about the project, strategy and team.

*If you’d like to know more or chat with us about the project, please email deborah@tippingpointfilmfund.com

*All donors will be acknowledged in the ‘With thanks to’ credits on the film.

We need your help to keep this project moving forward. All the work undertaken so far has been on a voluntary basis. It is now essential that the team secure funding in order to keep the project sustainable.

Thank you for any and all the funding support you are able to give.

Deborah
On behalf of film-makers Wyn Baptiste and Dominic Asbridge.

As filmmakers from the North Kensington area, Wyn Baptiste and Dominic Asbridge have been documenting events since the tragedy from the perspective of the local community. Their ultimate goal is to produce a feature length documentary, while in the interim they will continue to make social media films attempting to keep Grenfell in the spotlight.

“My Grenfell Year” (30 mins) is an example of their ongoing work.

On the first anniversary of the Grenfell Tower tragedy, members of the community whose lives have changed forever, look back over the past 12 months. We hear from those who escaped the fire, those who lost loved ones and those who have worked tirelessly to provide support. They also share their thoughts on the quest for justice and what lies ahead. Community Film CIC was set up by local film makers to document the stories of local people affected by the tragedy. This film was made in conjunction with social media platform Grenfell Speaks. All work was carried out on a voluntary basis. This is a non-party political campaign aimed at giving people a voice and raising issues of social justice and questions that need to be addressed in the interests of positive change. Community Film CIC will aim to raise funds to allow the project to be sustainable over the next few years with the goal of making a feature length documentary following the story as it develops and examining the wider context surrounding the fire and issues that matter to us all as a society.

SUMMARY TREATMENT – short films and social media campaign
This multi-media campaign will be made up of a series of short-form films for social media, authored by people directly affected by the disaster and their calls for positive change in our society. These films will culminate in a feature length documentary which will tell the story of the Grenfell Tower tragedy in its entirety, of the social and political history that led to the catastrophe which shook a nation. The documentary will use first-hand testimony from the people who were there, giving them the opportunity to reveal what happened that night, the incredible community response in its aftermath and, crucially, what happens next in the pursuit of truth and justice. The film will focus on efforts being made both publicly and behind the scenes to create real and meaningful change, as people attempt to rebuild their lives and make sure a tragedy like this never happens again. It is vital the production remains independent and community focussed but relevant to a global audience. As the mainstream media retreat and there’s a lull in proceedings in the public inquiry, this campaign aims to keep the issues alive and document the ongoing work of this remarkable community.

FEATURE LENGTH DOCUMENTARY Release June 2020/2021
GRENFELL TOWER: LESSONS FROM THE ASHES will be a powerful feature-length film telling the story of those directly affected by the Grenfell Tower fire disaster and their quest for justice. This is a story with implications that reach far beyond this remarkable neighbourhood in West London and poses questions about social justice, inequality and power in cities across the world. People who were there reveal what happened that night. They tell of grief and sorrow. Anger and disbelief. Ignored warnings and flawed governance. Bravery and resolve. Spirit and resilience. We will see that strength and resolve tested over the course of the government commissioned public inquiry into the fire and some of the circumstances that led to it and the terrible loss of life. But will the inquiry deliver justice? Phase two of the inquiry will look at why the fire happened and some of the “cultural” issues that contributed to the disaster. The film will examine these issues, attitudes, structures and the wider context. This film will shine a light on the social and political history that ended in the tragedy that rocked Britain and ask many of the questions the public inquiry may not. This is the story of ordinary people living in the wealthiest borough, of one of the world’s richest countries, being let down by the oldest democracy on earth.

THE COMPANY
A Community Interest Company (CIC) has been established to run production of both the social media films and the feature length documentary. This vehicle will protect the independence of the production and editorial control. 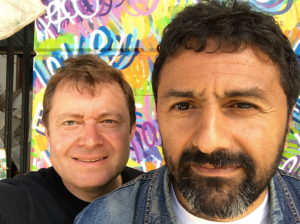 Wyn is a former BBC journalist, presenter and experienced interviewer and Dom has over 20 years experience in film. They came together to produce a documentary on the origins of the Notting Hill Carnival, which was commissioned by the BBC. In 2017 Wyn and Dom were in the process of developing a documentary about social justice and inequality in the neighbourhood, specifically around the Westway, when tragedy struck on 14th June.

Wyn Baptiste and Dominic Asbridge grew up in Notting Hill and Shepherd’s Bush, in families who felt a deep sense of social responsibility to the area: Wyn’s father was one of the founders of the Notting Hill Carnival, while Dom’s was the vicar of St Stephen’s for 30 years and established the Shepherd’s Bush Housing Association.