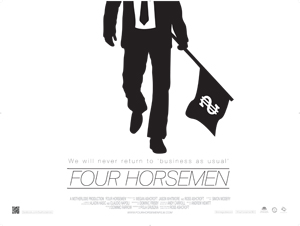 Four Horsemen is the debut feature from director Ross Ashcroft which reveals the fundamental flaws in the economic system which have brought our civilization to the brink of disaster.

23 leading thinkers – frustrated at the failure of their respective disciplines – break their silence to explain how the world really works.

The film pulls no punches in describing the consequences of continued inaction – but its message is one of hope. If more people can equip themselves with a better understanding of how the world really works, then the systems and structures that condemn billions to poverty or chronic insecurity can at last be overturned. Solutions to the multiple crises facing humanity have never been more urgent, but equally, the conditions for change have never been more favourable.

“The refreshing thing about this film is that Ross Ashcroft also takes the viewer on a broader journey, linking in terrorism, global warming and poverty along with world finances to present a troubling picture of the world today.”
– Mark Adams, Chief Film Critic Screen International

From Joseph Stiglitz to maverick US commentator on RT, Max Keiser; from the FT’s Gillian Tett to economist Ha Joon Chang (23 things they don’t tell you about capitalism) this film takes a step back to put the financial crisis into a much wider context,  framed as it is within the metaphor of Four Horsemen of the Apocalypse.  A festival hit, the film has just been released in the UK to great critical reviews.

The Lexi Cinema is located at 194 Chamberlayne Road, Kensal Rise, NW10 3JU. It is around 7 minutes walk from Kensal Rise over-ground station and a good bus service runs from central London. The 52 (from Victoria) and the 6 (from Oxford Circus) stop directly outside the cinema. To map your route by public transport click here, and for a streetmap click here.