Climate change and pandemic are changing everything, including our activity priorities

Hope there’s something of interest for you in our round-up of activity over the past few months – as well as plans for the coming months.

The pandemic, coupled with ever more alarming climate change indicators, has prompted TPNS to dedicate the vast majority of its time to its Transform Defence (for Sustainable Human Safety) advocacy project. It addresses global military spending and emissions in the context of climate change, an underfunded WHO and a $2tr gap (minimum) in SDGs funding. All this while many G7/ G20 nations increase budgets for nuclear weapons ($72 bn during the pandemic) and completely fossil-fuel dependent conventional militaries. And, as we witnessed at the recent G7, rich nations prove yet again they are masters of aspirational rhetoric yet (wilfully) incapable of taking the drastic measures needed to address the global COVID vaccine rollout or carbon emissions cuts.

Time is running out, if it hasn’t already. Our work is primarily focussed on helping raise as much awareness and action on the role of the global military in climate change. This in turn begs the question for every nation and government on the planet: “what does ‘defence’ mean in the face of the climate emergency, global pandemic and rampant global inequality?”

If we’re all in it together, as climate chaos and pandemic surely shows us, how does this sentiment play out in foreign, defence and international development policy-making?

We need a transformation in international relations to accompany the long-overdue economic and environmental transformation for our pandemic-hit, climate changed world.#

We are aiming to build up a comprehensive set of reports and briefings that can offer new information, insights and roadmaps for ways out of the current failing foreign, defence and international development paradigm. Whether it’s a practical, universal yet ambitious route to framing cuts to global military spending and redirecting to global need (Five Percent Proposal); or the military spending / emissions link which reveals the role of the military in climate change and the double damage effect on the world’s poorest; Green New Deal Plus (the absence of the military in GND plans and importance for all GND advocates to include military emissions); or finally, how all this is at odds with so much of the work of the United Nations, whether climate (IPCC/UNFCCC), development and SDGs, underfunded peace-keeping or, more widely, the utterly out-dated framing of defence and security at the global table where the UN Security Council in is the hands of five nations – the P5.

We launched Transform Defence in December 2020 with two reports- Indefensible: The true cost of the global military to our climate and human security and Global Military Spending, Sustainable Human Safety and Value for Money, both of which were well received and shared across development, environment and peace organisations. Indefensible has eight recommendations, four of which are at the heart of our G7/20 letter (more below).

There are a handful of researchers/academics around the world who work on the topic of military emissions and climate change. TPNS works to bring an ever wider audience to this issue.

The Global Military and the United Nations Briefing, New Publication.
Research and write-up of a 26 page briefing on the myriad ways in which the global military works against the interests of the UN. The paper has a series of strong recommendations across climate/IPCC/UNFCCC; peacekeeping; funding of SDGS; and concludes with the call for a High-Level Open Debate on our Transform Defence concept ‘Carbon Neutral Peace and Defence’.

The clock is ticking on the global military fulfilling its responsibility in reaching net-zero. The 30 signatories comprise an international list from science, academia, international development, environment, peace and the arts. The Open Letter was widely shared by signatories and calls for a G7 / G20 commitment to come clean on their collective military emissions ahead of COP and to take account of the letter’s recommendations as an urgent roadmap for action on this all too hidden aspect of the climate-emergency.

Research partner on TNI’s flagship annual project State of Power, delivering the research for their outstanding infographics on Coercive World. It  covers military, police, homeland security and prisons around the world. In light of attacks on Gaza, an additional tab was added addressing Israel’s military and defence industry. TNI, founded in 1974, is an international research and advocacy institute committed to building a just, democratic and sustainable planet. 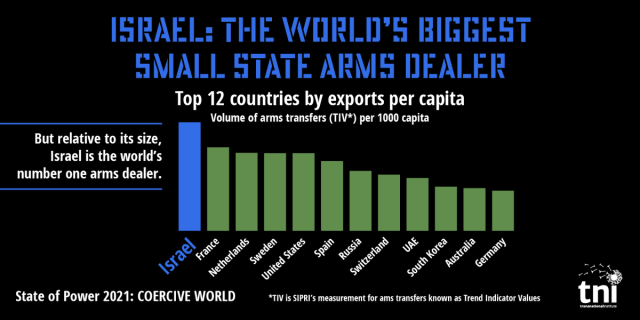 Our TNI Israel/Palestine infographic was published as Israel’s attacks on Gaza intensified and was widely shared across our own and other social media. MAH Twitter and FB page both saw considerable increase in followers. Here is our earlier report on UK/EU/Israel military ties.

Essential Reading: We cannot recommend enough the latest book by ICAHD (Israeli Committee Against House Demolitions) founder (and MAH supporter) Jeff Halper Decolonizing Israel, Liberating Palestine: Zionism, Settler Colonialism, and the Case for One Democratic State. Jeff argues that the only way out of a colonial situation is decolonization: the dismantling of Zionist structures of domination and control and their replacement by a single democratic state, in which Palestinians and Israeli Jews forge a new civil society and a shared political community.

Blueprint: Various things conspired to delay the completion of a book we started during last summer lockdown but we are very much hoping to finish up our ‘blueprint for a new global foreign and defence policy’ book by late summer/early autumn.

September UN General Assembly Meeting. We intend to start sharing our UN briefing with contacts across a number of UN departments (development, peace, climate) in order to start to gauge interest in our work and our UN related calls. From there, we can assess next steps, collaborations etc.

November COP 26. We are working on a number of ideas – stunt, webinar, live event… watch this space!