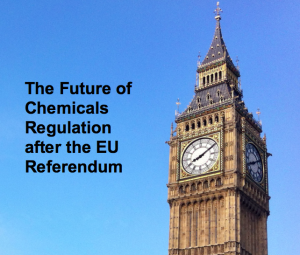 In this Breast Cancer PreventionMonth, the real impact of Brexit on breast cancer needs to be understood.  Brexit gives us one more lens through which to better understand the scale of the exposures  problem, its links to breast cancer and critically, why we need to stay within the EU regulations regime if we are to better protect citizens and workers.

Through our everyday living we are exposed to hundreds of harmful chemicals including those known to have a carcinogenic and/or hormone disrupting effect and about which we are not informed.  From flame retardant on furniture and beds, to clothes and food cans and plastics, we are guinea pigs from pre-birth through our entire lives as we absorb and ingest these toxic substances.

Meantime, scientific evidence links many of these toxic chemicals to breast cancer.  The EU has gone some way to address this by responding to civil society calls to push back the powerful chemicals lobby. Many harmful chemicals are now banned through EU regulation.

And so, while the chances are you’ll never have thought about breast cancer prevention in relation to Brexit, they are linked. As EU citizens, consumers and workers our health has benefited and continues to benefit from the European Union chemicals regulation REACH  – a highly sophisticated, progressive pan-EU system to control toxic chemicals. Though not perfect, it is nevertheless regarded as the best in the world and at its heart is ‘the precautionary principle’, which means to take action to prevent harm, even if there is uncertainty. For the UK to be de-coupled from REACH as a consequence of Brexit would have a devastating impact on many aspects of consumer, workplace and environmental health as well as our economic wellbeing. 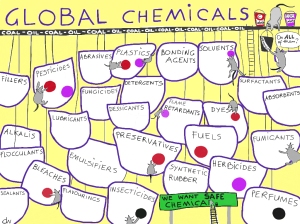 A woman’s chances of being diagnosed with breast cancer are getting higher with each decade. From 1 in 12 in the 1990s it is now 1 in 8 in 2017.  There has been an almost doubling of breast cancer cases since the 1970s.  This massive increase is not accounted for by ‘lifestyle risk factors’ (smoking, alcohol and weight) since they are linked to some 30-50% of breast cancer cases. To walk away from the EU’s REACH regulation is to deny vital progress made in the protection of women’s health through the banning of chemicals linked to breast and other cancers.

There is a major role for the breast cancer charities to be playing here. Since at least 50% of cases have no known cause, to ignore, as they do, the ever growing body of  scientific evidence linking environmental and occupational exposures to breast cancer, especially in the workplace, is highly negligent. We need them to both acknowledge and act on this evidence.  If they were to do this, in turn, it would mean they too could join the many diverse calls for us to stay in REACH.  Those advocates include the House of Commons Environmental Audit Committee (Chair Mary Creagh), a range of health and environmental NGOs, even some within the chemicals industry. 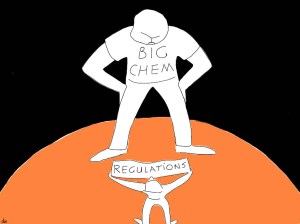 The good news is that increasingly, such new evidence (see end for full list) is being picked up by popular media, for example most recently published evidence showing that hormone disrupting chemicals affecting the endocrine system are found in household dust.  A new report launched by Pesticide Action Network UK (PAN UK) revealing that the fruit and vegetables given out to four-to-six year olds via a government scheme aimed at promoting healthy eating habits contained residues of 123 different pesticides, has also caught attention.  All this cumulative evidence is part of the reason why, six years ago, the World Health Organisation called for all governments to include environmental and occupational prevention measures as part of all national cancer plans. Additionally the American Public Health Association called for the links between breast cancer and certain chemical exposures to be acknowledged by their government.   (*A full list of latest evidence at the end)

So, given the many calls for action by international bodies (scientific, health, trade union, civil society) to address this evidence, coupled with ever rising rates of diagnosis, why is there such reluctance by all those in the UK with the power and responsibility – government, industry and breast cancer charities – to act? For decades the evidence linking these risks to breast cancer has increased, so why are we still waiting?

Find out more at https://frompinktoprevention.org/

Hope to see you on 26th October

REACH stands for Registration, Evaluation, Authorisation and Restriction of Chemicals. The main aim of the REACH Regulation is to protect humans, wildlife and the environment from the threat of industrial chemicals. Prior to REACH, industry had not been required to check that chemicals were safe prior to use and discharge. There is more information on REACH at the European Chemicals Agency. For a definition of Endocrine (Hormone) Disrupting Chemicals http://www.who.int/ceh/risks/cehemerging2/en/

PAPER TILL RECEIPTS coated with harmful chemicals US researchers have shown that handling till receipts can contribute to workers’ exposure to three compounds, used as developers in thermal papers. They conclude that thermal receipt paper is a potential source of occupational exposure to BPA, BPS and BPSIP. http://chemsec.org/why-keeping-the-uk-in-reach-is-the-best-option-post-brexit/ The EU has agreed to ban the use of the endocrine disruptor Bisphenol A (BPA) in thermal paper till receipts by 2020.

HOUSEHOLD DUST SILENT SPRING INSTITUTE http://www.sciencedirect.com/science/article/pii/S0013935117307971. Silent Spring Institute scientists have been studying the link between breast cancer and environmental exposures—to chemicals in the air we breathe, the food we eat, and the products we use on a daily basis—for many years. In 2007, a widely cited review from the Silent Spring Institute identified 216 such chemicals that cause mammary tumours in animals, providing a roadmap for future studies in humans. A decade later, Silent Spring scientists have published an update in the journal Environmental Research, and they say that the evidence today—including documented effects in people of all ages—is stronger than ever.

http://www.chemtrust.org/dust-not-only-a-nuisance-but-also-a-source-of-hazardous-chemicals/?utm_content=buffer953b6&utm_medium=social&utm_source=twitter.com&utm_campaign=buffer
Dust-Not only a nuisance, but also a source of hazardous chemicals eg Brominated Flame Retardants from furniture, phthalates from plastic. We spend up to 90% of time in our homes, our offices or at school. Children, particularly babies and toddlers playing on floors, are specifically vulnerable to ingesting these pollutants through breathing in or eating dust. Chemicals of concern include flame retardants, plasticisers and non-stick and water-proofing chemicals. Many are toxic and some are persistent (do not break down) and bio-accumulative (increase in concentration in our bodies and we do not tend to excrete them)’

http://www.telegraph.co.uk/news/2017/07/12/household-dust-makes-people-fat-groundbreaking-research-indicates/
A pioneering study in the US revealed that normal house dust is capable of carrying hormone-altering chemicals that prompt cells in the body to accumulate fat. The dust particles were found to contain endocrine-disrupting chemicals (EDCs), synthetic or naturally occurring compounds that can interfere with or mimic the body’s hormones. These include flame retardants in sofas and carpets, as well as phthalates, substances added to plastics to increase their flexibility

DRINKING WATER, PLASTICS & CHEMICAL INTAKE https://www.theguardian.com/environment/2017/sep/06/plastic-fibres-found-tap-water-around-world-study-reveals  Tests show billions of people globally are drinking water contaminated by plastic particles, with 83% of samples found to be polluted.  Microplastics are also known to contain and absorb toxic chemicals and research on wild animals shows they are released in the body.

THREE QUARTERS OF ALL HONEY CONTAINS HARMFUL PESTICIDES (Oct 2017) http://www.dailymail.co.uk/sciencetech/article-4952858/Three-quarters-honey-contains-harmful-pesticides.html Three quarters of samples were laced with at least one neonicotinoid chemical Neonicotinoids are neuro-active chemicals that can attack the nervous system.

BREAST CANCER PREVENTION PARTNERS (BCPP formerly Breast Cancer Fund)  STATE OF EVIDENCE REVIEW 2017 https://www.bcpp.org/resource/state-evidence-2017/
Singly and in combination, toxicants may have contributed significantly to the increasing rates of breast cancer observed over the past several decades. Exposures early in development from gestation through adolescence and early adulthood are particularly of concern as they re-shape the program of genetic, epigenetic, and physiological processes in the developing mammary system, leading to an increased risk for developing breast cancer.

THE LANCET (May 2017) CANCER, ENVIRONMENT, PREVENTION http://www.thelancet.com/journals/lanonc/article/PIIS1470-2045(17)30268-1/fulltext
A Lancet report of the annual American Association of Cancer Research conference. ‘Cancer is a product of both nature and nurture, in which environmental risk is an equally crucial—and often neglected—factor because it is a multi-sectoral issue….can this insatiable desire to enhance our fundamental understanding of tumour biology overshadow the health gains that could be secured by improved environmental protection? To eradicate cancer, governments need to both identify and act not only on increased risk susceptibility, but also ensure that people are not exposed to carcinogenic materials through gross environmental mismanagement.