As we emerge from the General Election, with much analysis undertaken and much more yet to come, it may be quite some time before the deeper meaning and consequences of the 2015 Election become apparent. The superficial speed of our 21st century life can trick us into thinking that change can happen equally fast. But does it? Drivers of change – for example, the neo-liberal project that has shaped our politics for more than four decades – move much more slowly than we might imagine, their impact deep and prolonged. And those who oppose, protest, dissent and march for rights and against injustices, often endure a long wait before seeing change. But, more often than not, change is what they see…

WE ARE MANY
UK release May 21st

An Independent feature discusses the film and the power of protest.

To book for May 21st event across the UK and to find out where the film is showing from May 22nd, visit http://wearemany.com/cinemas/

Saturday 30th May will see the second Open Bethlehem Ambassadors seminar in London. Meet other passport holders who have had the experience of working in Bethlehem and speak to a number of tour operators who have been successfully running fact finding tours to Bethlehem and neighbouring Palestinian towns. Leila Sansour will give a presentation about Bethlehem which will hopefully leave you all much wiser and give you the confidence to tell the story yourselves. She will also share the latest plans for distribution of the film and ways in which people can help and get involved.

Please confirm your attendance by the 25th of May to
juliakatarina@openbethlehem.org

NB There is a £25 fee to join the day. You can pay on the door or by sending a cheque, payable to Amos Trust, together with your photos with your name on the back. Please send this as soon as possible to the address below so we can prepare your passports ahead of time. The event will conclude with a Bethlehem Passport Ceremony at 5pm.

We are also delighted that there is to be a private screening of Open Bethlehem for the Irish president, academics, church leaders and NGOs on 2nd June 2nd in Dublin.

FROM PINK TO PREVENTION
Thursday 28th May 6pm, Central London

This is a follow-up meeting to our first From Pink to Prevention campaign group meeting at the end of January. At that meeting, we shared our new website and outlined our areas of work, focussed on pushing for the inclusion of environmental and occupational risk factors in breast cancer policy across government, industry and cancer establishment links policies. Our effort is primarily to ask some big questions of the cancer ’establishment’.

We have been in correspondence with Breakthrough Breast Cancer since December 2014 (Breakthrough just merged with Breast Cancer Care in April 2015) regarding its reluctance to acknowledge the role of environmental and occupational risk factors and placing environmental risks in the same risk category as under-wired bras (ie doubtful) in their public communications. Given the growing body of evidence to the contrary (including EU and WHO) we are keen to ask questions of Breakthrough that can explain why they adopt this position. If you would like to know more about our work on this or attend our meeting, email deborah@tippingpointnorthsouth.org

Tipping Point will be sharing advance plans for the follow up to Bethlehem Unwrapped at the next ICAHD UK annual conference. This new project will be framed in the context of celebrating the historic freedom struggles of the civil rights movement and the anti apartheid movement and will be supporting the global call to BDS against apartheid in Israel-Palestine, which celebrates its 10th anniversary in July 2015.

ICAHD director Jeff Halper, will speak to the conference’s title, ‘Judaizing Palestine’, because the demolition of Palestinian homes and the displacement of the Palestinians are at the heart of Israel’s policy of ethnic cleansing. This is also the subject of ICAHD’s new campaign that will be launched at the conference. There will also be news about Jeff’s new book that comes out in the autumn, which looks at the Israeli arms trade and homeland security and how this effects not only Palestinians, but also us here in the UK and across the world. 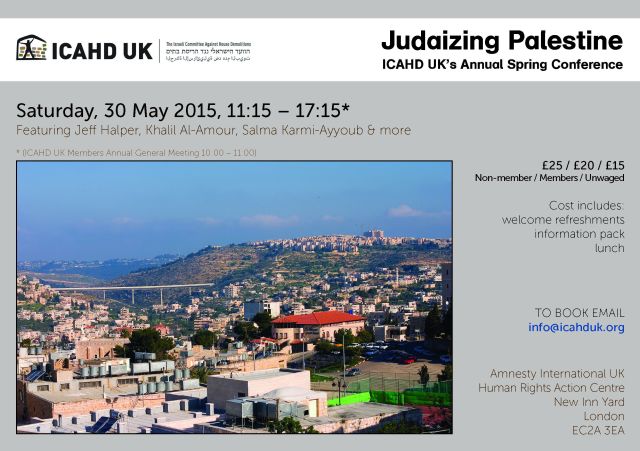 Every month we hear new calls to increase military spending echo around the world – from EU and Nato to the Middle East and Russia. This both fuels the risk of conflict as well as draining resources from other vital areas of need such as public services or emergency aid – while ignoring other unaddressed major security threats that stem from climate change.

Our Five Per Cent campaign wants to see excessive global military spending put centre-stage alongside other issues like debt cancellation, tax justice and climate change. TPFF is proud of its support of Amir Amirani’s film We Are Many and its website is also a resource for those who want to know more about how to get involved with some of the many issues raised in the film.
We hope that WE ARE MANY can raise debate on many inter-connected issues that the Iraq War has raised – and will continue to raise; from the value of protest to political accountability; from the costs of war to the bringing of charges of war crimes to those who took us into this disastrous conflict.

Tipping Point’s work is supported primarily through grants and individual (some major) donors. As our work matures and expands, we also want to expand our small scale individual funding base. So, we are encouraging all our friends and supporters to find out more about what we do and spread the word about out work. We are now pointing new supporters to our page on the PATREON funding platform. PATREON is very much about continuous support for creative projects – we are increasingly seeing our work as ‘creative activism’ and feel that this platform is the best place for us to showcase our work.

We know times are incredibly tough, but if you see the value in the kind of creative activism we undertake, then we would love you to think about supporting our work.

With best wishes from all at Tipping Point