On one level, new narratives around the economy, social security and immigration are really welcome. However, critically, little advance has been made on democracy and pluralism – or a strategy to fundamentally transform how politics is done, who by and with whom. The UK is made up of myriad communities, with differing levels of power, and a new politics is one in which every voice is heard. The whole Corbyn wave was a demand for a new politics – more networked, plural and bottom up. Instead tribalism, factionalism and parliamentarianism still dictate Labour’s Westminster mood. John McDonnell’s call at the weekend for Labour to back Proportional Representation is vital, but that still demands the Tories are defeated. The Labour Party can aim for a majority, but the reality is that it will have to talk to the Lib Dems about seats in the South West; do a deal with the Greens in Brighton to ensure Green votes go to Labour elsewhere; in Wales work with Plaid Cymru to see off UKIP and in Scotland talk to the SNP about federalism – especially now the rejuvenated Tories could pick up parliamentary seats in 2020. Labour has promised an all party Constitutional Convention and now need to deliver it. Worryingly, there have been no announced plans or process to reform the Labour Party itself and bring it into the 21st century. Will this be enough to hold on to those new members who expect a new politics?
END_OF_DOCUMENT_TOKEN_TO_BE_REPLACED

“When it comes to assessing Labour’s electoral fortunes, Corbyn is treated with all the due process of a 17th-century woman accused of witchcraft and dunked in a river. If she drowns she’s innocent; if she floats she’s guilty and condemned as a witch. Either way the verdict is never in her favour,” wrote Gary Younge. 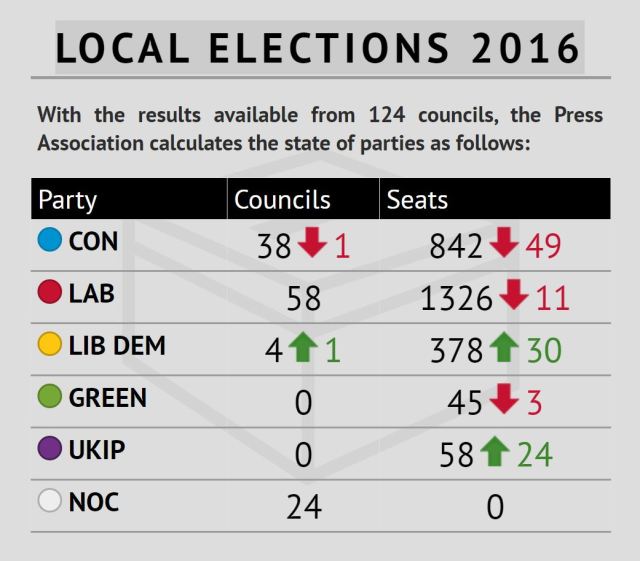 It was widely predicted before the election that Labour would lose 150 plus seats in the local elections in the England, according to the polls at the time; some even went as far as 300 seats. In the end, the Labour not only lose far fewer seats – one quarter less than the Conservatives – but also hold on to the same number of councils. Labour did not just hold to key councils, such as Southampton, Harlow, Crawley, Worcester, Redditch, Derby, Hastings, Cannock Chase, Carlisle and Nuneaton where the local MPs are conservatives, but actually increased its share of the vote in the majority of them. It is true that Labour failed to gain seats in contrast to what happened in the 2012 local election under Ed Miliband, but it is more to do with Ukip. Ukip was a much less significant force in 2012; this time their performance was strong while the Conservatives were lacklustre. People did protested against the Conservative government’s incompetent rule and its austerity but not all the votes went to Labour.
END_OF_DOCUMENT_TOKEN_TO_BE_REPLACED